Greater insight into evaporation for Dutch Meteorological Institute with Lysimeter

The Royal Netherlands Meteorological Institute (KNMI) is using various methods to measure evaporation at the National Atmosphere Observatory in the Utrecht village of Cabauw. The KNMI has recently started using Eijkelkamp’s Smart Lysimeter as a new and independent way of measuring evaporation. Research scientist Fred Bosveld was indirectly involved in development of the lysimeter and talks about how the measuring device was purchased and the social significance of measuring evaporation.

‘In Cabauw, we measure evaporation in three different ways, primarily from the atmospheric side. The standard method is the Eddy correlation. We also measure the vertical differences in the moisture content in the atmosphere and estimate evaporation based on measurements of the surface energy balance. In addition, we work in collaboration with Wageningen University to carry out scintillation measurements. The interesting thing about these methods is that they all give a different result. So there is some uncertainty as to what the reality actually is. The lysimeter works more from the hydrological side, and that is one of the reasons why we came to you. We are keen to have a completely independent method of measuring evaporation, thus allowing us greater insight into the accuracy of the individual methods and where the truth actually lies. We already have a series of evaporation measurements stretching over more than 30 years with the KNMI, one of the longest in the world. In light of this, it’s extremely important to know how accurate those measurements are.’

‘We can also see that collaboration between the hydrological and meteorological worlds has intensified over the years. In the past, they were two quite separate worlds, but gradually we discovered that we need one another. Now that we have the lysimeter, we are going to bring the two worlds even closer together, and that will help to improve trust in one another’s measurement methods.’

The decision to opt for the Eijkelkamp Smart Lysimeter

‘In addition to the financial aspect, the Smart Lysimeter from Eijkelkamp is easy to install and maintain, which contrasts with large lysimeters. At the same time, the Eijkelkamp Smart Lysimeter is larger than the mini lysimeters. With these smaller types, you quickly run into the problem of unrepresentative measurements.’

‘In the Ruisdael Observatory project, we are starting with one lysimeter. We can then gain some experience using this measuring technique in clay and peat soil. If everything goes well, we may install several devices in due course, to give us better statistics.’

‘There is increasing demand for reliable information about drought,
and evaporation plays a significant role in this’

‘Over the past three years, the problems associated with drought have become increasingly important
as we’ve had several dry spring seasons in a row. Social bodies such as regional water authorities,
drinking water companies, the Directorate-General for Public Works and Water Management,
provinces, and the government, as well as the agricultural industry, are increasingly of the view
that we, as a nation, need to take action. Consequently, there is increasing demand for reliable
information about the occurrence and effects of drought. Evaporation and precipitation play an
important role in this in view of the fact that together, they create the water balance for the ground.’

‘Over the past three years, the problems associated with drought have become increasingly importantas we’ve had several dry spring seasons in a row. Social bodies such as regional water authorities,drinking water companies, the Directorate-General for Public Works and Water Management,provinces, and the government, as well as the agricultural industry, are increasingly of the viewthat we, as a nation, need to take action. Consequently, there is increasing demand for reliableinformation about the occurrence and effects of drought. Evaporation and precipitation play animportant role in this in view of the fact that together, they create the water balance for the ground.’

‘More and more parties are interested in detailed information about how drought comes about and what happens during a drought. This always requires weather models, and evaporation is a part of these models. If these models can be optimized, we will ultimately have better climate and weather forecasts and models. Ultimately, inhabitants of the Netherlands as a whole will benefit. These are rather intensive projects that could last for years. One example is a weather model that was recently presented, which used wind measurements from Cabauw from seven years ago.’

‘We have been working very well with Eijkelkamp Soil & Water. At the moment, we are working on configuring the exchange of data to our needs. It is very nice to see how a company like Eijkelkamp is working on the development of these sorts of technology. They are really sticking their neck out, as there are always risks involved when you are developing new technologies. Communication is good, and in the coming weeks and months, we will be working more on the way in which I would ultimately like the Lysimeter to be configured. As a researcher, I have certain requirements when it comes to settings, and together we will be looking at what is possible and what is realistic. At Eijkelkamp, there is plenty of expertise and willingness to discuss, which for me – as a researcher – is ideal.’

Watch the video in which Fred Bosveld tells more about the Lysimeter.

There has been a KNMI measurement and research location in the Utrecht village of Cabauw since 1969. The most noticeable aspect of the location is the 213 m measuring mast.

The KNMI has been working within the CESAR consortium in Cabauw since 2002, collaborating with a vast number of research institutes, thereby forming an international platform for the testing of new measurement methods, models for describing weather and climate, and satellite measurements.

Since 2018, CESAR has been a part of the large-scale research infrastructure Ruisdael Observatory, which combines four Dutch atmospheric measurement locations with mobile monitoring stations and high-resolution atmospheric models. 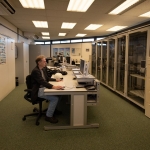 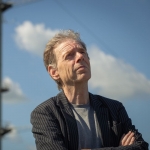 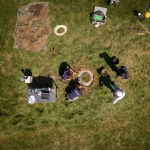 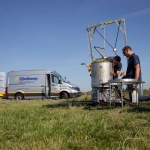 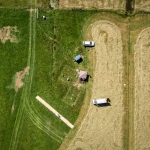 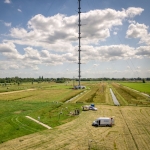 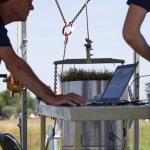 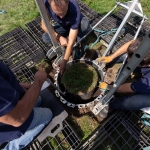 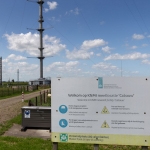 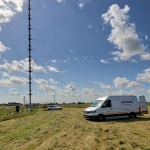