During a large-scale research project in the 1990s, Wageningen University & Research (WUR) investigated the presence of organic matter in Dutch soil. Soil samples were taken at no fewer than 1,400 locations. A follow-up study was conducted in late 2018, and the 1,400 locations were revisited. This time not just to measure organic matter but also the penetration resistance. With further analysis, the latter can provide insight into compaction. Willy de Groot and Paul Gerritsen are both involved in this extensive research project, in which the Eijkelkamp Penetrologger plays a prominent role.

It was a unique opportunity – parallel to the research into the presence of organic matter in Dutch soil – to simultaneously carry out penetration resistance measurements, because visiting so many locations is a real logistical challenge,’ says Willy de Groot, soil researcher at WUR. ‘We soon discovered that, with the available capacity and time, we would not be able to carry out nearly as many measurements as we had expected. That's when we sought the assistance of Eurofins, given their extensive experience in analysing and determining soil quality. But measuring penetration resistance is another matter, so we conducted several training days. The 35 Eurofins employees who would be carrying out the measurements were divided into groups and taught how to use the Penetrologger. This included detailed discussion of the embedded software and the technique to be used when working with the Penetrologger: keep the pin straight above the hole, hold it still, and be precise. Then there was a practical session in which the equipment was used in the field.

‘The Penetrologger is a standard choice when it comes to compaction research.'
Willy de Groot - Wageningen University & Research

‘Now the measurement work is underway. We provide the address details of the measurement locations, arrange any necessary permits, and Eurofins coordinates the rest of the process. However, there's some doubt as to whether we will actually end up with 1,400 measurements. That might be because some people will not give permission to perform a measurement on their property, and some locations that were still farmland in the 1990s have since been built on, making it impossible to carry out a measurement. I expect we will end up with about 1,200 readings.’

‘The Penetrologger is a standard choice when it comes to compaction research. Colleague and compaction specialist Jan van den Akker often uses the Penetrologger for EU projects pertaining to soil strategy. In the south of the Netherlands, for example, we are conducting a trial with sorghum, a tropical cereal crop that may be able to counter compaction in the soil. This is because sorghum roots can make their way through compacted soil. Corn and sorghum have been planted alongside each other on a trial field, and we are using the Penetrologger there to see whether there are any differences – and if so what those differences might be. However, we have to be careful not to disturb the trial ourselves, because the soil can also be influenced by conducting intensive measurements. That's why we do our work carefully, in the headlands. So alongside monitoring, the Penetrologger is used for conducting trials and to devise new measures against compaction.’

Data from all over the Netherlands

Once all the locations have been visited, we will start processing the data. It is a huge data set, so that will be a big job,’ says Paul Gerritsen, researcher with Plant Research International at WUR. ‘We want to filter out a few key figures for each measurement location, such as the depth at which we find the highest resistance to penetration, the greatest depth at which they were able to perform measurements, and the maximum depth. This ultimately produces a median curve per location, which we then use to examine the relationship to the compaction. And, through analysis, we can establish a good correlation. Where, in the Netherlands, does compaction play the greatest role? Where is the biggest concern?’

‘Soil compaction is known to play a role in agriculture, in connection with active tillage. But this research will also give us more insight into compaction as it occurs under natural circumstances. So, the fact that this data set spans all of the Netherlands is fantastic.’ 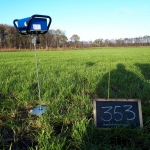 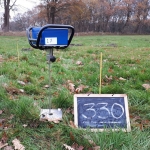 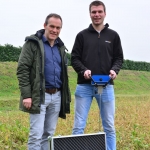 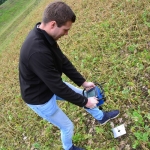